The night before heading on vacation I stayed at my buddy Alex’s apartment. We stayed up entirely too late playing Resident Evil 4 (or 5…can’t remember). Basically I was unbelievably smart and booked a 6:10AM flight and there’s no transportation to the airport from my place early enough. Alex lives in South London so I was able to catch the 4AM train to the airport, which got be there just before 5. Yup – you read that correctly. I went to sleep at 1:30 and got up at 3:30 to stumble to the train and then get to the airport.

As I was preparing to board I met another American guy who was enroute to Dubrovnik for the start of his travels before his semester in Spain starts. Was a pretty nice kid. We chatted a bit and fell asleep on the short (2 1/2 hour) flight to Croatia. Now some may think that’s a long flight, but after my 6 hour journeys across the Atlantic (which by the way are still practically NOTHING) it didn’t seem much to me. As soon as we got off the plane I had to take off my sweatshirt. It was about 20 degrees warmer than it had been in London, and it was only about 9:30am. Made it through customs, at which I was disappointed because they didn’t stamp my passport, then boarded the bus to Old Town with Keith, my American counterpart from Sacramento.

We arrived outside the gates of the Old Town and I had directions to my hostel, but Keith had no idea where his was. We found a tourist info center, got a map and ended up settling at an internet cafe so he could find the phone number and call the place. After a bit of finagling he was on his way. We planned to meet up later on, but never did.

Dubrovnik’s Old Town is basically all stone. And stairs to the heavens, or so it seemed. When I finally reached my hostel I felt like I had climbed Mount Everest. To be fair I’m terribly out of shape, but in my defense those stairs were death-defying. I got to the hostel a little over an hour before I could check-in, but I didn’t care. I was exhausted from lack of sleep and the stairway to heaven. I finally checked in, got my stuff laid out over my bed, unpacked a bit and headed out into town. I had not eaten yet and by this time it was about 2pm.

I found a little pizza joint on a side alley that looked much like this and decided I’d go for it. I was close enough to Italy that it should be good, right? ABSOLUTELY. This pizza was great and I was served a HUGE mug of Ozujsko, which is a Croatian Lager. It was all great, and unbelievably cheap. After eating lunch and relaxing in a random alley I headed out to see some sights. I basically just walked around within the Old Town up and down the streets and more killer stairways. I eventually found myself outside the gates looking over the ocean eating an ice cream. It was here that I formally met Phil, a fellow Spurs fan from Birmingham. We had met briefly in the hostel during check-in. After seeing each other 2 or 3 times in our travels that day he decided the final time that it was time to have a conversation. We then spent the next 4 days together. You’ll be seeing a lot about him in my Croatian adventures.

After our introductions and little bit of getting to know each other we went for a beer, then eventually back to the hostel. We were staying at a place called Fresh Sheets, a really fantastic hostel at the top of the Old Town on the ocean side. Now I say ocean side, but there are giant stone walls that prevent you from seeing it. Anyway, we decided to hit up the happy hour at the hostel. 10 Kuna (less than $2 and just over 1 pound for a beer)…you can’t really beat that. We met some cool folks that night, some of which went to bed and 2 others decided to come out with Phil and I. 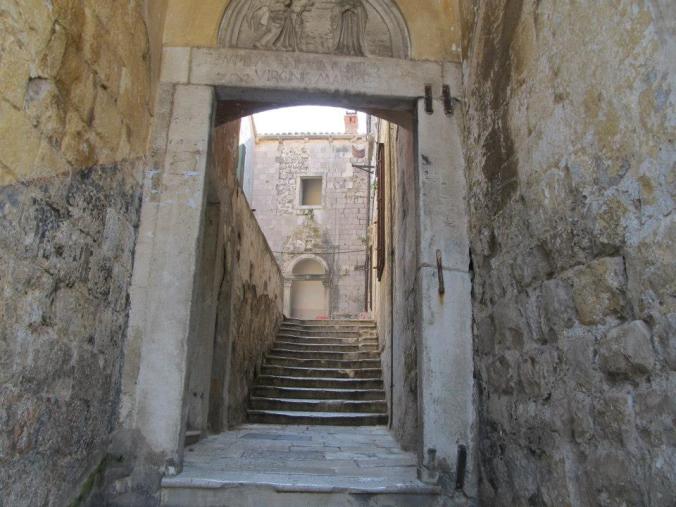 On our way down the stairs I managed to slip, fall and get a sweet bruise on my left arm. Mind you this was one of my more sober moments of my vacation. I had maybe 2 beers so this was just a matter of me not knowing how to walk. The stones were slippery…but I was the only one who managed to fall. Oh well…We made it out to some Irish Pub (yup, they’re everywhere) and I watched a Packers/49ers game. Never thought I’d watch American Football in an Irish pub in Croatia…guess I can check that off the list.

Going on vacation is like pressing the “reset” button on your current life. No matter how stressed, overworked or frustrated you are you can make it all go away. Especially, for me,  in Central Europe. I went from being overworked and underappreciated in a foreign country, albeit England, to realizing the biggest perk of working in London is the ability to travel Europe for next to nothing.

Up until now I had only been to Edinburgh, Dublin and Brighton outside of London. Okay…Cornwall too, but that’s a different story altogether. Now that I’ve taken a proper trip to continental Europe, I totally understand. Granted I never thought I’d see Croatia or Slovenia before France, Spain, Germany or The Netherlands, but that’s the beauty of it all. I’ll organize trips there soon enough. If not while I’m living in London then later in life. That’s completely reasonable. I’ve spent the past week or so in countries that declared their independence IN MY LIFETIME! That’s just wild to me. Both Croatia and Slovenia became their own states in the early 90s after being part of the Socialist Federal Republic of Yugoslavia (SFRY).

I do remember as a kid seeing news reports of conflict in Bosnia and the surrounding areas. It didn’t occur to me, unfortunately, until driving through Bosnia on Tuesday of last week the true extent of importance this bears on the lives of citizens in the six countries formed from Yugoslavia (SR Bosnia and Herzegovina, SR Croatia, SR Macedonia, SR Montenegro, SR Slovenia and SR Serbia).

I’ve met some amazing people on this journey who were directly affected by that war, and have been able to get some, yet very little, insight into what it means to them. I can’t imagine how I would have coped with such uncertainty and bloodshed in my lifetime. It makes me wonder if places such as Iraq and Afghanistan will be tourist attractions in 20 years. You may scoff at that, but I’m serious. Everything in this world changes so quickly, so who can really know?

This trip has made me regret not traveling more often. Thankfully I’m only 25 and have plenty of my life ahead of me to do so. My buddy Vinnie and his wife Kara  go abroad somewhere new every year. I think from this moment on I need to do the same. So many people, especially Americans, spend their lives in one place. I can’t do that anymore. My love for history and the world in general has never given me more of a kick in the ass as it is now. I’ve been to 7 countries and 2 countinents. Only about 200 and 5 to go…

Anyway – this is the introduction to my full account of my time spent here. Over the next 9 days or so you’ll either be amazed or bored (or something in between) by my my experiences. My hope is the former.

Make that distinction for yourself.